Virtual Books and Beyond with Bonnie J. Addario, author of The Living Room: A Lung Cancer Community of Courage 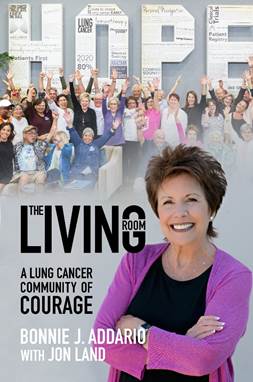 BONNIE J. ADDARIO, is Co-Founder, Board Chair and patient advocate of GO2 Foundation for Lung Cancer, as well as an educator. She has empowered patients and given them a voice since receiving a stage 3B lung cancer diagnosis almost two decades ago. Recognizing the need for education, empowerment, advocacy, and research to help patients and families, Bonnie and her family founded the Bonnie J. Addario Lung Cancer Foundation (ALCF) in 2006. In 2019, ALCF and the Lung Cancer Alliance merged, forming GO2 Foundation for Lung Cancer. Ms. Addario acts as an adviser to industry leaders, clinicians, and policymakers and is a member of the Personalized Medicine Coalition board. In 2020, she received the Lifetime Achievement Award from CURE Magazine.

Bonnie was diagnosed with stage 3B lung cancer at age 55, when she was at the top of her game and leading one of the largest privately held oil companies in the United States. In her corporate arena, and as the first woman to be elected to the California Independent Oil Marketers Association, she was the one always in control; she was the one always fighting for change and challenging the norm!

After her diagnoses, she knew this was going to be a very different kind of challenge, one she would have to depend on others for if she were to survive. And she did. That was almost two decades ago.

Now, with the merger of The Bonnie J. Addario Lung Cancer Foundation and the Lung Cancer Alliance, she has become co-founder, board chair, and patient advocate for GO2 Foundation for Lung Cancer, the largest lung cancer organization in the United States. “We are a ‘Patient’s First’ entity,” said Addario, “and everything we do is about and for them.”

We are excited to welcome Bonnie Addario, along with noted oncologist Dr. Ray Osarogiagbon from Baptist Cancer Center and lung cancer survivor Gina Hollenbeck, who will discuss the book and how lung cancer clinical trials are bringing so much hope to lung cancer patients today.

Dr. Raymond Osarogiagbon is Chief Scientist at Baptist Memorial Healthcare in Memphis, TN, and Director of the Multidisciplinary Thoracic Oncology Program and the Thoracic Oncology Research (ThOR) Group at the Baptist Cancer Center.

(He is also a member of the IASLC Staging and Prognostic Factors Committee, NIH Cancer Prevention Steering Committee; co-chair of SWOG Early Lung Cancer Subcommittee; and member of the Fleischner Society.)

Gina Hollenbeck has lived with Stage IV Lung Cancer since her eventual diagnosis in 2015, when her only symptom was a cough. She is a wife and mother of two boys, a nurse, an athlete, and a lung cancer-research advocate who spreads the message that anyone with lungs can get lung cancer. In 2018, Gina became the President of ALK Positive, a patient-driven group with the mission to improve the life expectancy and quality of life of ALK positive patients worldwide. She is a passionate advocate for lung cancer research, early detection, patient-centric clinical trials, and biomarker testing.

(Gina has served as a panelist for GO2Foundation for lung cancer, ASCO, NTREK Summit, ALK Positive Summit, and NLCRT 2018, 2019, 2020. She serves on the NLCRT Women and Lung Cancer task force as wells the Biomarker Planning Committee. In 2019, she was granted the prestigious honor of being selected as one of the Patient Advocate Travel award recipients to the IASLC 2019 World Conference on Lung Cancer held in Barcelona, Spain. )

Danielle Hicks is the Chief Patient Officer of the GO2 Foundation and the daughter of Bonnie Addario. She has been working in lung cancer non-profits for the past 11 years and, at GO2 Foundation, is responsible for all aspects of patient programming, services, engagement and empowerment, along with strategic insight and planning around lung cancer awareness and education. She has hands-on experience as a caregiver as it relates to lung cancer: the disease, treatments, the emotional and physical experience, and survivorship.